Rome is a place that I never really needed to go to when I started planning this trip. I had my key places I wanted to see in Italy (Venice, Florence, and Pompeii) and I figured Rome was going to be too busy and too crazy. But the more I thought about the trip, however, I started thinking more and more about it.

The most important thing to keep in mind about Rome is that it is HUGE. It is a big walking city too. Because of my ankle, I was rethinking Rome as soon as I got there. Most people thought I was crazy for only planning one day there, but it was all I could probably handle. The trip was getting a bit exhausting and the more I kept going, the easier it was to get through. I did have a moment where I nearly lost my nerve and went home. No one fully understands how difficult traveling like this is until you do it. I was tested in every way.

Since I was trying to see as much as I could and there really wasn’t any way for me to do it all in one day, I booked an open top bus tour. Plus, it was hot so I was welcoming any amount of breeze as possible. The bus actually worked out pretty well because I was able to see a lot. It also talked about some of the history of Rome.

The weird thing I found about Rome was that the food was all really expensive. Italy itself has some expensive food, but everything was more in Rome. You can get two scoops of gelato anywhere else in Italy for about 3 euro, but in Rome, it is more like 5 euro. Since it was so hot, that’s all I ate and spent a bunch of money on gelato. I’m not complaining though!

Rome was great but I was really looking forward to the next city in my journey. Since I was a kid I was fascinated by the story of Pompeii and when I started planning this trip, I knew I was going to make a trip to Naples to see it. I spent a couple days in Naples so I could take a day and have a little bit of relaxation and laundry before starting to travel pretty rapidly. My main reason for going to Naples was to go to Pompeii so I decided to spend my money on that experience instead of some random things around Naples.

I woke up in the morning, ready to go and excited for the day! The bus picked me up for the tour and drove us down along the coast so we had a perfect view of Mount Vesuvius. The tour guide was telling us some of the background information of Pompeii and how it was a major city until the explosion. she also told us that it was not a volcanic eruption like we would think of with lava flows. Basically, the entire volcano exploded. What we see now of Vesuvius is only a portion of what was there before.

It was thankfully a little bit cooler of a day so there was some breeze and I didn’t feel like I was overheating. It made it so much better to take everything in. My tour guide (who walked around in heels) was really knowledgable about Pompeii and everything that has happened since they started uncovering the city. She showed us the major areas of Pompeii like the port, the brothels, and the bakeries. It is really incredible to see the inventions of the people that were in Pompeii. I was almost in tears because I was so happy to be there. The best part? The whole city has not been dug up yet. There is still a large chunk of the city that they have not uncovered yet. I will definitely be following this closely, especially now that I’ve been there and walked the same roads that the people of Pompeii did nearly 2000 years ago. 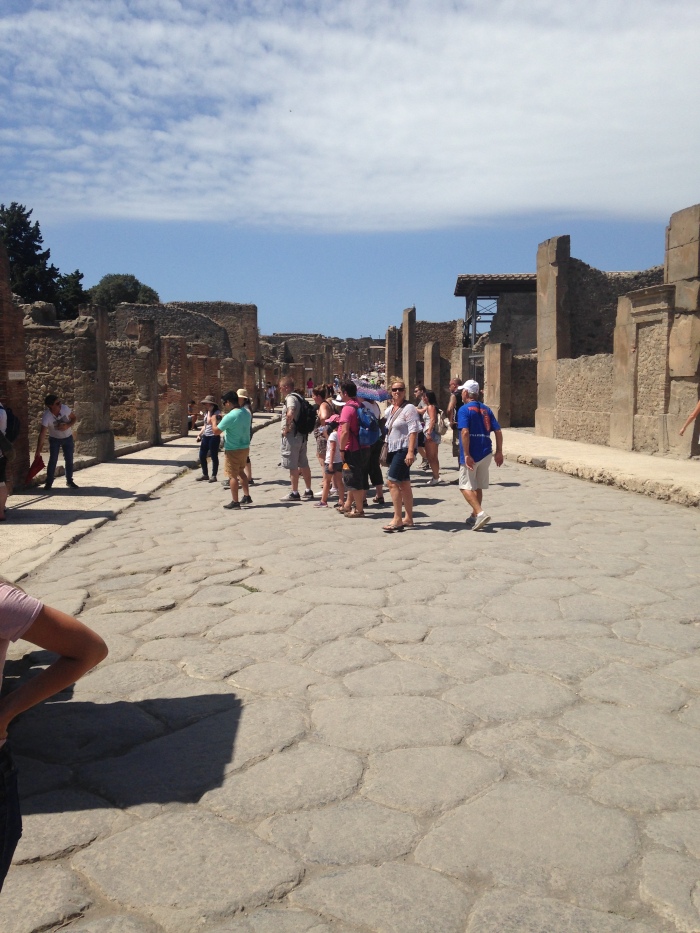 I rode the high of seeing Pompeii for the rest of the day as I got some pizza and gelato to celebrate a full 12 days in Italy. The next day I was about to go to Portugal so it was my last night in Italy. My thoughts? Lovely country, some really beautiful cities, but maybe go in April instead of August.