My bus ride to Vienna wasn’t too bad. Maybe I was getting used to this? Probably not, but I’ll keep telling myself that! It was still a bit on the cloudy and rainy side in Vienna, but I still wasn’t mad. I knew that I had a hot couple of weeks coming up in Croatia and Italy so I threw my leggings on and trekked down to Austria.

Like I mentioned in my Prague post, I booked myself a hotel for one night instead of spending a night in Bratislava. I think that I bit off more than I could chew with all that. I needed a good night’s sleep and a good shower; both things that you take for granted until it’s hard to come by. Hostels are a great way to see Europe on a budget, don’t get me wrong, but they come with some sacrifices. You can splurge and get a private room for yourself, or you can go for a dorm which is usually better to meet people. Dorms can be really loud though and you can sometimes come across some, for lack of a more precise word, unique people. My sleep hasn’t been very good since I’m usually awake until the early hours of the night with the people in my room who refuse to turn lights off, or the noise coming from the street or the bar downstairs, and sometimes even the heat. Then I wake up when the first person is rushing around trying to pack their stuff up to get to their flight or bus or train. I was craving a solid 8 hours of sleep. After weighing the different options, I cancelled my bus to Bratislava and the hostel there and opted for a relatively cheap hotel two blocks from my hostel in Vienna. That way, I could leave the next day at checkout and easily walk to where I had to go. It was so nice to have a good shower and a room all to myself. There was a fan in the room that I didn’t have to share with anyone else and I could sleep in a bed bigger than a twin. My first day in Vienna was not that thrilling because I spent the day relaxing and enjoying some decent wifi and binged on Netflix laying in bed.

I woke up the next day feeling refreshed since I slept for probably a total of 12 hours in the time I spent at the hotel. I wandered over to my hostel where I could (finally) do some laundry to prepare for the next chunk of my journey. I had stayed at this chain of hostels before and I honestly love them. The Wombats hostels are so nice and have a really great sense of community. I’ve had a really hard time getting to know and even talking to fellow travelers but these hostels have been the ones where I meet people. My first night in the hostel, they had a comedy night in their bar so I went down on my own to have a couple Austrian beers and hopefully meet some people. I ended up chatting with an Australian guy who was also traveling on his own and later a girl I recognized from my dorm room. Both had mentioned they were going to take the free walking tour in the morning which I was also planning on taking so it was already looking up.

The next morning, I was ready for the walking tour, but once again it wasn’t too warm. I was really grateful I did laundry and had a clean pair of leggings I could wear because I’m pretty sure I would have frozen if I wore shorts. Our tour guide was hilarious. He made lots of puns and “dad jokes” which is exactly my brand of humor. He was fantastic and he knew so much about Vienna. Humor and history…should be my elevator pitch if someone if trying to get to know me!

We walked quite a ways through Vienna but it turns out, the city itself isn’t that big. I thought we were really far away from the Danube, but it was only about ten to fifteen minutes walking from the Danube to Naschmarkt. My new Australian friend and I went to walk down by the Danube since that is where all the street art was and we were not disappointed. After a brief stop for some Bratwurst, we walked along the banks admiring all the art. Vienna itself doesn’t have a ton of street art and it has been contained along the banks of the river. It’s very colorful and even has some other types of art as well. We walked and talked for a while before turning back and heading back toward Naschmarkt. 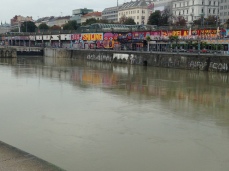 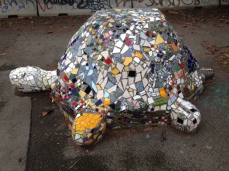 After a tiny siesta and a delicious dinner of Wienerschnitzel and Austrian beer, we met up with our other new friend from London and hung out at the bar at the hostel. Cheap drink prices are definitely a way to keep people. I can honestly say that one of the best times I had was in Vienna because I finally got to meet people and not feel like I was completely alone. Vienna itself is gorgeous, but I think what made it great for me was finally not feeling completely alone.