It’s no secret that London is my favorite place in the world, so when given the opportunity to come within 1,000 miles of this beautiful place, I have to go back. I’m so happy I got to spend a week here, even though I’ve been to London a lot in my life.

First day, I took the train down from Edinburgh and that took up most of my day. It is always a beautiful ride, no matter what the weather is. It’s so pretty in the British countryside. The train arrived at Kings Cross around 3pm and I could walk the two blocks to my hostel pretty easily…even with the 70 pounds of luggage. It was shocking how quickly I fell back into the rhythm of the city. It was almost like I never left. The hostel was…interesting.

I’m not sure what I was expecting, but it was a shock to me. I was in a room for 18 people, so there were nine bunk beds that were literally connected to each other. There was no space between each bed at all. I was on a bottom bunk so it felt like I was in a tube to sleep. The only way to get out was to inch your way down the end of the bed. It was a little bit freaky when you suddenly touched your neighbors feet in the middle of the night too.

I had to roll with the punches so I got my stuff situated and headed back out. I was meeting a friend at Liverpool St. Station since it was a lot easier for me to meet her there than for her to find her way to me. So I wandered around looking for stuff to do in the five or so hours until I would meet her. I walked down to where my first flat in London was, then took the tube to my second London flat and then wandered along the river. I loved doing this when I lived here, but it is a whole lot nicer in the summer when there is a heatwave going on and the entire city feels like is 100 degrees. I found a little riverside pub that I thought was cool until I walked up to it… 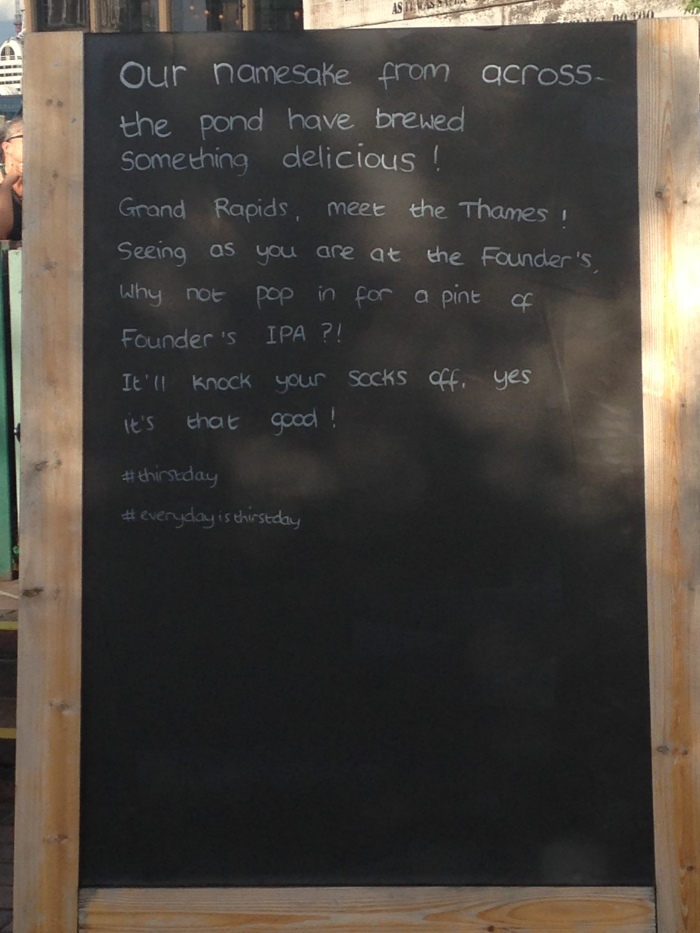 Saw this sign and got way too excited! Founder’s is a brewery in Grand Rapids, Michigan where I used to go to school. Founder’s was one of my favorites and their beers are still my go to’s. It ran inside was told the bartenders, who were not interested unless I was buying a beer. So I got my All Day IPA and went to the river and took it all in.

I made my way over to Liverpool St. and found another pub where I could plug my phone in and waited patiently for my friend who was on the train from London Stansted. We called it an early night once she got there since we were both tired from traveling all day and we were talking about all the things we were going to do the next day.

Day two involved a lot of walking. First, we took the tube to Baker Street and walk down to Hyde Park. We talked about life while sitting on a bench by the pond in the middle of Hyde Park and also discussed what I hadn’t done in London, which was a very small list. We decided eventually on doing a bus tour so that we could see as much of the city in the two days she was with me as possible. It was fun and I think I found my calling as a London tour guide! That history degree was really coming out to play during the tour. Along with this tour, we also got a boat ride on the Thames. After we got some classic fish and chips, we ventured out onto our river cruise. It was so hot in London that being on the river and getting the breeze in your face felt so nice.

The boat cruise took us from Parliament and Big Ben down to the Tower of London, where I just had to say the fun fact about how the King used to keep his animals in the Tower, including his polar bear which was allowed to fish in the Thames. Why did I say this? I don’t know, but everyone around me thought it was great so I’ll roll with it. 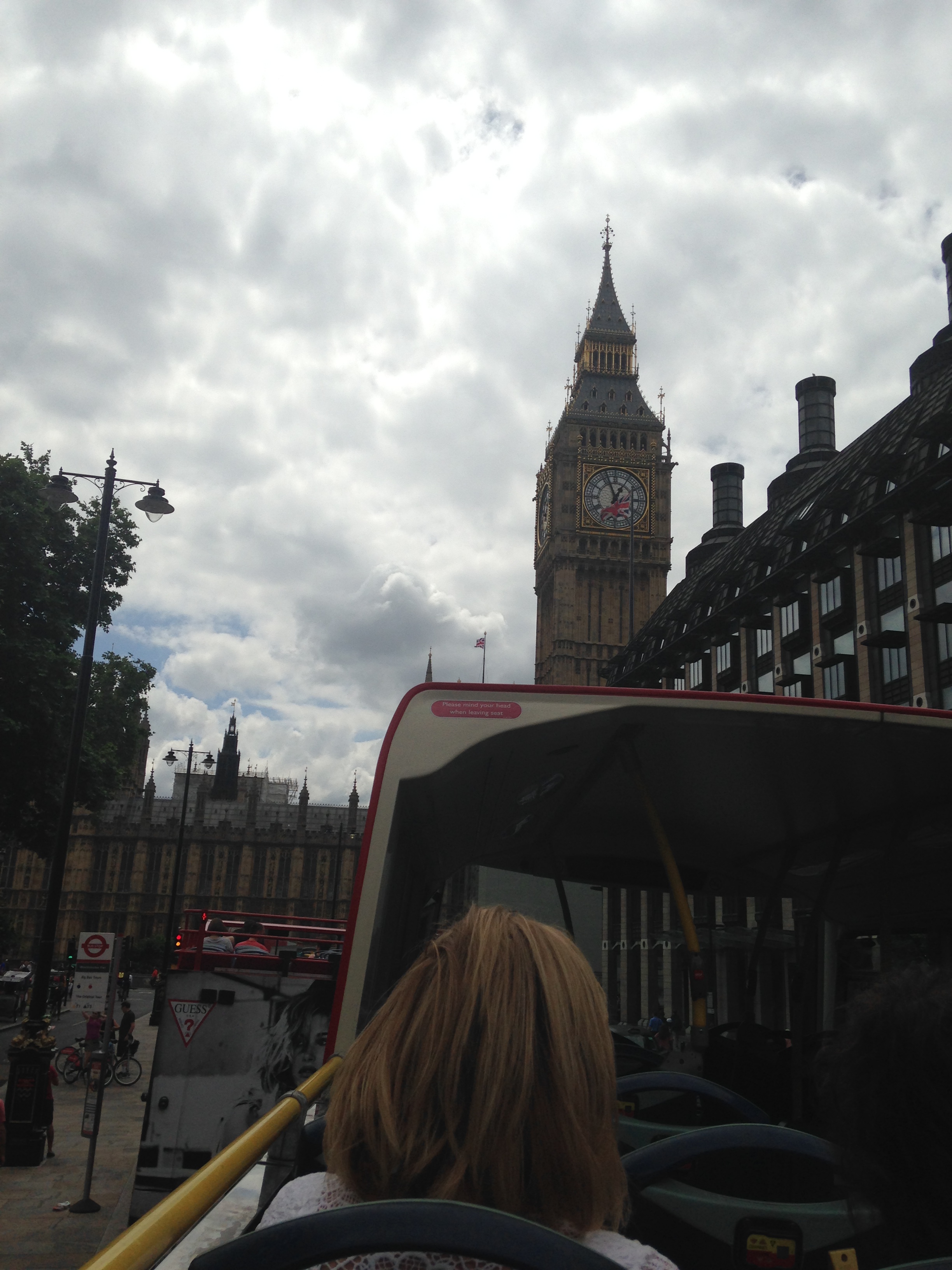 By the time we got back to Westminster, it was about 7pm and we were exhausted having been out and about for roughly 11 hours already, not to mention we were so sweaty and hot that all we wanted were cold showers. We headed back to the hostel and called it a day.

Day three was just as busy as the day before. First we went off to Hogwarts via Platform 9 3/4, then we channelled the Beatles and crossed Abbey Road, and pretended we understood cricket while walking by Lord’s Cricket Grounds. All of this before 10am! I wanted to show my friend one of my favorite places so we hiked up Primrose Hill and soaked in the sun while gazing out over the city. It was hot, but there was a little breeze at the top making it slightly more bearable. We then wandered through the gardens in Regent’s Park before getting a light lunch near the pond there. She was leaving a little early that day so we tried to pack as much in as we could, but after two days in the hot sun, we were pooped. We headed back to the hostel and said goodbye as she left for the airport.

It’s also important to note that an old ankle injury of mine started acting up again and I was having trouble walking. I didn’t mind the rest that came a little earlier that night. I was able to meet and old friend for drinks nearby which was awesome! It was so good to see him after four years. I met up with him again on Thursday night for dinner and we were able to catch up even more.

The next day was really just a catch up with old friends day for me. I got a chance to write a little bit down by the river and then meet a friend from my time studying in London for lunch and then wandered through Borough Market. After we split, I found another place to write a little closer to my hostel and spent my afternoon sipping tea and writing. It really felt good to have a day to do this since every day had kind of been non-stop since I started. I think it is extremely important when you’re traveling like this to take some slower days and have a break every once in a while. It gets exhausting really fast and it will hit you like a brick wall if you’re not careful.

Friday finally came around and I was dropping my big bag off for the European leg of my tour. Family friends on the Isle of Wight were kind enough to hold onto my bag until I came to get it at the end of August. It was refreshing to get out of the city and have actual breeze. It was beautiful out too and the sea was fairly calm so the crossing on the ferry was pretty relaxing. I, of course, got a sunburn while visiting them even though I put on sunscreen that morning! At least I don’t look too pale anymore…

The next two days were calm. I didn’t spend too much time exploring because I know this city so well. I spent it relaxing and preparing for the next few weeks of adventures and tried to figure out some activities in the other places I was going. My bus to Paris was late on Sunday night, so I was able to relax a little during the day so that I could prepare for an overnight bus ride….which I didn’t end up sleeping on…more on that with the next post. I love London, but there wasn’t really any need to explore more right now. Plus, I’ll be back the first weekend of September! It’s still my favorite place in the world, and the calm days there where I could just write and take in my surroundings were good for the soul. 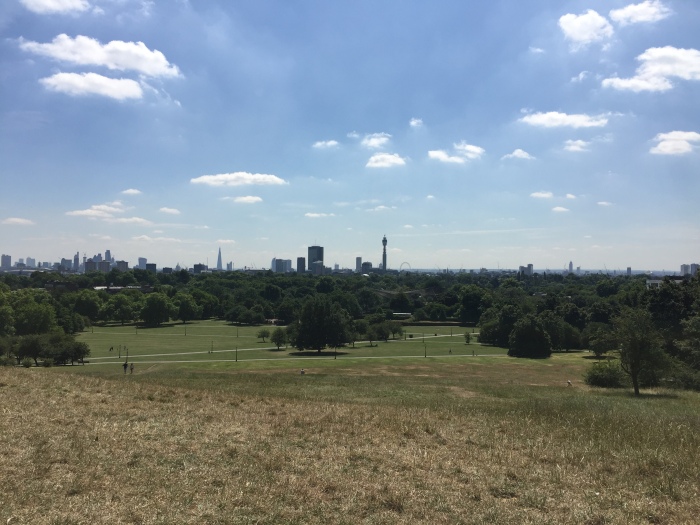